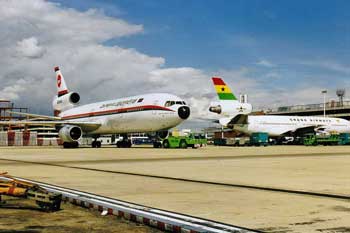 The international airport in Dhaka is well-equipped with facilities to handle passenger and cargo flights. The national carrier Bangladesh Biman and a number of major airlines of the world run regular services to and from Dhaka. Biman and a private company fly smaller aircraft to transport passengers to different airports within the country. The Dhaka Sheraton Hotel, the Sonargaon Pan Pacific Hotel and Purbani Hotel run their own transfer services to and from the airport for convenience of their guests. The Parjatan Corporation also runs a similar transfer service with a fleet of comfortable cars and microbuses. The corporation operates a large number of hotels, motels, cottages, restaurants, duty-free shops and package tours in Dhaka and at different tourist spots outside.

In the Sunderbans the visitors can stay in comfortable rest houses, take boat trips along the creeks and from observation towers watch tigers, deer, monkeys, crocodiles and birds. In Dhaka and elsewhere various kinds of oriental and western food are served by the hotels, motels and restaurants. Bangladehi costumes and handicraft are attractive in design and quality and are good value for money. In 1995, foreign tourists numbering 156, 231 visited the country bringing for the national exchequer over Tk. 95 million in foreign exchange.

Climate: Bangladesh has a tropical monsoon-type climate, with a hot and rainy summer and a dry winter. January is the coolest month with temperatures averaging near 26 deg C (78 d F) and April the warmest with temperatures from 33 to 36 deg C (91 to 96 deg F). The climate is one of the wettest in the world. Most places receive more than 1,525 mm of rain a year, and areas near the hills receive 5,080 mm ). Most rains occur during the monsoon (June-September) and little in winter (November-February).

Bangladesh is subject to devastating cyclones, originating over the Bay of Bengal, in the periods of April to May and September to November. Often accompanied by surging waves, these storms can cause great damage and loss of life. The cyclone of November 1970, in which about 500,000 lives were lost in Bangladesh, was one of the worst natural disasters of the country in the 20th century.

Required clothing: Lightweight cottons and linens throughout the year. Warmer clothes are needed in the evenings during the cool season. Waterproofs are necessary during the monsoon season.