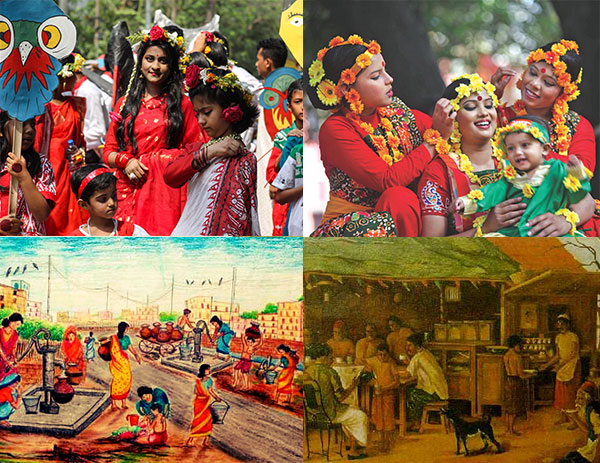 Fairs and festivals have always played a significant role in the life of the citizens of this country. They derive from them a great amount of joy, entertainment and color for life. While most of the festivals have sprung from religious rituals, the fairs have their roots in the very heart of the people, irrespective of religion, caste or creed.

The national book fair known as the Ekushey Book Fair is one of the popular literature fairs of the country and takes place in the month of February in front of Bangla Academy remembering the martyrs of the liberation war of Bangladesh. Many other tradition events also are celebrated here, such as, the international trade fair, various Hinduism Puja Fairs, and obviously the Bengali New Year Fair (Baishakhi Mela).

The advent of Bengali New Year is gaily observed throughout the country. The Day (mid-April) is a public holiday. Most colorful daylong gatherings along with arrangement of cultural program and traditional Panta at Ramna Park, Dhaka is a special feature of Pahela Baishakh. Tournaments, boat races etc. are held in cities and villages amidst great jubilation. Many fairs are held in Dhaka and other towns and villages.

In the international calendar, it is celebrated on 14th February. In the most popular playground and fields, Baishakhi Mela (Bengali New Year Fair), are hosted with cheering harmony. The fairs come with the blend of amusement and art together. Trying out different amusement rides like Nagordola, which is very similar to Ferris Wheel, artificial horse ride and many others. The event is celebrated throughout the whole country with excitement, laughter and enjoyment.

March 26 is the day of Independence of Bangladesh. It is the biggest state festival. This day is most befittingly observed and the capital wears a festive look. It is a public holiday. The citizens of Dhaka wake up early in the morning with the booming of guns heralding the day. Citizens including government leaders and sociopolitical organizations and freedom fighters place floral wreaths at the National Martyrs Monument at Savar. Bangla Academy, Bangladesh Shilpakala Academy and other socio-cultural organizations hold cultural functions. At night the main public buildings are tastefully illuminated to give the capital city a dazzling look. Similar functions are arranged in other parts of the country.

Different popular Bangladeshi bands hold concerts in different prestigious venues of the country. On the other hand, throughout the whole day, countless flocks of parades can be seen celebrating the independence of the country and obviously remembering the martyrs. Different traditional fairs consisting various eye-catching items are also held throughout the day. Overall, looking the green and red flags of our country on every roof, listening to memorable speech of the father of nation of our country and obviously, discussing about the histories of Bengali independence is patriotically splendid.

21 February is observed throughout the country to pay respect and homage to the sacred souls of the martyrs' of Language Movement of 1952. Blood was shed on this day at the Central Shahid Minar (near Dhaka Medical College Hospital) area to establish Bangla as a state language of the then Pakistan. All subsequent movements including struggle for independence owe their origin to the historic language movement. The Shahid Minar (martyrs monument) is the symbol of sacrifice for Bangla, the mother tongue. The day is Public Holiday. Mourning procedure begins in Dhaka at midnight with the song “Amar Bhaier Raktay Rangano” ekushay February (21st February, the day stained with my brothers' blood). The National Book Fair “Ekushey Boi Mela” faces its busiest day on the 21st February, which without a doubt leads to a magnificent boost to the sales of the fair. On the other hand, the day is remembered with the popular artists and bands performing songs of our beloved country and obviously 21st February based parades. The television media also plays a huge part on uplifting the event’s memories by telecasting different dramas, songs, historical interviews and many others. Nationals pay homage to the martyrs by placing Floral wreaths at the Shahid Minar. Very recently the day has been declared World Mother Language Day by UNESCO.

Eid-e-Miladunnabi is the birth and death day of Prophet Muhammad (s). He was born and died the same day on 12th Rabiul Awal (Lunar Month). The day is national holiday, national flag is flown atop public and private houses and special food is served in orphanages, hospitals and jails. At night important public buildings are illuminated and milad mahfils are held.

As Bangladesh is an Islamic State country, Eid-E-Miladunnabi is a major event. It is celebrated throughout the whole country, with prayers, remembering Islamic preaching and by hearing different histories of Muhammad in the mosques.

This one of the two major Islamic festivals is celebrated throughout the whole country with huge preparation. Eid-ul-Fitr takes place just after the holy month of Ramadan. The festival has both social and spiritual rituals. The celebrations of Eid-ul-Fitr continues for three days. Buying new clothes for the day of Eid-ul-Fitr is a tradition that is being continued since the beginning, this is one of the reasons, and the shopping malls are congested during the last few days of Ramadan. The celebration starts by following the tradition of praying Salah at the national Eidgah field and various other mosques.

After returning home from the session of Salah, children perform “Salam”; an Islamic form of greetings, and the elderlies give them Salami/Eidi as present, which is a small amount of money. A special and delicious food named Semai, is prepared in every houses with joy and delight.

This is another major Islamic festival, which is celebrated widely throughout the whole country. It takes place right two and a half months after Eid-Ul-Fitr. Animals are sacrificed in reminiscence of Hazrat Ibrahim's (AM) preparedness for the supreme sacrifice of his beloved son to Allah. It is a public holiday. The day begins by praying Salah at Eidgah field and the other prestigious mosques. The Muslim population of the country prepares to perform the sacrifice afterwards.

After the sacrifice, the distribution of the meats to the poor is celebrated throughout the whole country. On the other hand, having mouth-watering foods such as Semai, Pulao and many others including the meat the people get from the animal sacrifice they make. Following Eid-ul-Fitr, Eid-ul-Azha is considered as the second biggest festival celebrated in Bangladesh.

Muharram procession is a ceremonial mournful procession of Muslim community. A large procession is brought out from the Hussaini Dalan Imambara on 10th Muharram in memory of the tragic martyrdom of Imam Hussain (RA) on this day at Karbala in Iraq. Same observations are made elsewhere in the country.

Durga Puja, the biggest festival of the Hindu community continues for ten days, the last three days being culmination with the idol immersed in rivers. In Dhaka the big celebrations are held at Dhakeswari Temple, where a fair is also held and at the Ram Krishna Mission. During 2001, 9.2 percent of the people of Bangladesh were Hindu. The number of Hindu have decreased since then, now it is 8.5 percent. Although the population have decreased, the joy of the celebration is still booming.

Christmas, popularly called "Bara Din (Big Day)", is celebrated with pomp in Dhaka and elsewhere in the country. Several day-long large gatherings are held at St. Mary's Cathedral at Ramna, Portuguese Church at Tejgaon, Church of Bangladesh (Protestant) on Johnson Road and Bangladesh Baptist Sangha at Sadarghat Dhaka. Functions include illumination of churches, decorating Christmas tree and other Christian festivities.

Different hotels and event places of Bangladesh host Christmas parties with festive celebration. The parties include appetizers, gifts, delicious cakes and obviously Santa Claus. Christmas was a very minor festival of Bangladesh even before a decade but now it is celebrated throughout the country.

Birth anniversary of the noble laureate Rabindranath Tagore on 25th Baishakh (May) and that of the National Poet Kazi Nazrul Islam on 11th Jaystha (May) are observed throughout the country. Their death anniversaries are also marked in the same way. Big gatherings and song sessions organized by socio-cultural organizations are salient features of the observance of the days.

Tagore is the writer of our national anthem while National Poet Kazi Nazrul Islam is famous as Rebel Poet.

At a place near Sonargaon (about 27 km. from Dhaka) a very attractive festival observed by the Hindu Community every year on the last day of Chaittra (last Bengali month) - mid April, when the devotees take religious bath in the river.

There are various other festivals that are habitually observed by Bangalees all the year round.