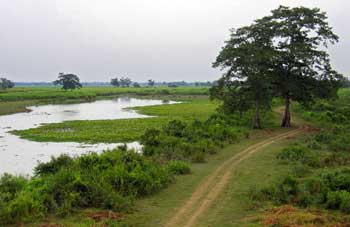 Dhaka - The Capital of Bangladesh

Dhaka is the capital and largest city of Bangladesh. With its colorful history and rich cultural traditions, Dhaka is known the world over as the city of mosques and muslin. Its fame attracted travelers from far and near throughout the ages. Today it has grown into a mega city of about 8.5 million people, with an area of about 1353 sq. km. becoming the hub of the nation's industrial, commercial, cultural, educational and political activities.

Dhaka is located in the geographic center of the country. It is in the great deltaic region of the Ganges and Brahmaputra rivers. The city is within the monsoon climate zone, with an annual average temperature of 25 deg C (77 deg F) and monthly means varying between 18 deg C (64 deg F) in January and 29 deg C (84 deg F) in August. Nearly 80% of the annual average rainfall of 1,854 mm (73 in) occurs between May and September.

Dhaka is located in one of the world's leading rice and jute or natural rawjute growing regions. Its include jute textile industries, muslin and cotton industries and also food processing, especially rice milling. A variety of other consumer goods are also manufactured here. The Muslim influence is reflected in the more than 700 mosques and historic buildings found throughout the city. The University of Dhaka (1921) and several technical schools and museums are located here.

GENERAL INFORMATION : Area : 815.85 Sq. kilometres (approx.) Population : Seven million (approx.) Climate : Tropical, with heavy rainfall and bright sunshine in the monsoon and warm for the greater part of the year. The winter months, from November to March, are however, most likeable, cool and pleasant.

National Memorial : It locates at Savar, 35, km. from Dhaka city. The memorial designed by architect Moinul Hossain is dedicated to the sacred memory of the millions of unknown martyrs of the war of liberation.

Lalbagh Fort : It was built in 1678 A.D. by Prince Mohammad Azam, son of Mughal emperor Aurangazeb. The fort was the scene of bloody battle during the first war of independence (1857) when 260 sepoys stationed here backed by the people revolted against British forces. Outstanding among the monuments of the Lalbagh are the tomb of Pari Bibi , Lalbagh Mosque, Audience Hall and Hammam of Nawab Shaista Khan now housing a museum.

1857 Memorial : ( Bahadur Shah Park) Built to commemorate the martyrs of the first liberation war (1857-59) against British rule. It was here that the revolting sepoys and their civil compatriots were publicly hanged.

Bangabandhu Memorial Museum : The residence of the father of the nation Bangabandhu Sheikh Mujibur Rahman at Dhanmondi has been turned into a musuam. It contains rare collection of personal effects and photographs of his lifetime.

Mukti Juddha Museum : Situated at Segun Bagicha area of the city the museum contains rare photographs of Liberation war and items used by the freedom fighters during the period.

Ahsan Manzil Museum : On the bank of the river Buriganga in Dhaka the pink majestic Ahsan Manzil has been renovated and turned into a museum recently. It is an example of the nations rich cultural heritage. It was the home of the Nawab of Dhaka and a silent spectator to many events. The renovated Ahsan Manzil is a monument of immense historical beauty. It has 31 rooms with a huge dome atop which can be seen from miles around. It now has 23 galleries displaying portraits, furniture and household articles and utensils used by the Nawab.

Old High Court Building : Originally built as the residence of the British Governor, it illustrates a happy blend of European and Mughal architecture.

Dhaka Zoo : Popularly known as Mirpur Zoo. Colorful and attractive collections of different local and foreign species of animals and birds including the majestic Royal Bengal Tiger are available here.

National Museum : Located at the central point of the city, the museum contains a large number of interesting collections including sculptures and paintings of the Hindu, Buddhist and Muslim periods.

Botanical Garden : Built on an area of 205 acres of land at Mirpur and adjacent to Dhaka Zoo. One can have a look at the zoo and the botanical garden in one trip.

National Park : Situated at Rejendrapur, 40 km. north of Dhaka city , this is a vast (1,600 acres) national recreational forest with facilities for picnic and rowing etc.

Central Shahid Minar : Symbol of Bengali nationalism. This monument was built to commemorate the martyrs of the historic Language movement of 1952. Hundreds and thousands of people with floral wreaths and bouquet gather on 21 February every year to pay respect in a solemn atmosphere. Celebrations begin at zero hour of midnight.

National Poet's Graveyard : Revolutionary poet Kazi Nazrul Islam died on the 29 August 1976 and was buried here. The graveyard is adjacent to the Dhaka University Mosque.

Suhrawardy Uddyan (Garden) : A Popular Park. The oath of independence of Bangladesh was taken here and Father of the Nation Bangabandhu Sheik Mujibur Rahman gave clarion call for independence on this occasion on the 7th March 1971. The place is famous for its lush verdure and gentle breezes. Eternal Flame to enliven the memory of the martyrs of our Liberation war has been blown here recently.

Banga Bhaban : The official residence of the President, located in the city . One can have an outside view of this grand palace.

Baldha Garden : Unique creation of the late Narendra Narayan Roy, the landlord of Baldha. Year of establishment was 1904. Located in Wari area of Dhaka city, the garden with its rich collection of indigenous and exotic plants is one of the most exciting attraction for naturalists and tourists.

Ramna Green: A vast stretch of green garden surrounded by a serpentine lake near the Sheraton Hotel.

Science Museum : The museum is a modern learning center related to the latest scientific discoveries. It is situated at Agargaon.

Sonargaon : About 29 km. from Dhaka. Sonargaon is one of the oldest capitals of Bangal. A Folk Arts and Crafts Museum has been established here.

Other attractions in and around Dhaka include the Institute of Arts and Crafts with its representative collection of folk art and paintings, handicraft shops. Aparajeya Bangla monument, picnic spots at Chandra and Salna, industrial estates of Tongi, Narayanganj, Demara, Tejgaon, cruising by country boat in the nearby river or a visit to a village to see jute cultivation, weaving and pottery making. Last but not the least travel by a horse driven cart or rickshaw along busy Dhaka streets is a rewarding experience.

Picnic Spots : There are good picnic spots in the area around Savar and Mirzapur. Other beauty spots connected by road with Dhaka include Joydevpur, Sripur, Madhupur, Rajendrapur National Park, Chandra and Salna, all of which have rest-houses that can be used by tourists on request to the Forest Department.

Bangaldesh Parjatan Corporation owns two picnic spots with Bunglows at Chandra and Salna which can also be hired by tourists.